What’s in a drench?

The term ‘drench’ refers to the anti-parasitic group of chemicals called anthelmintics. It is quite an inaccurate term as it implies either thoroughly wetting the animal or giving something orally. In the past this could have reflected the oral and pour-on methods of applying the anthelmintic but now they are available in injectable forms, the term seems a little out-dated. Flukicides are a separate group of antiparasitic and are specifically designed for the control of liver fluke.

The majority of anthelmintics registered for use in dairy cattle are considered broad-spectrum, meaning they are effective against a wide range of worms and at different stages of their lifecycles. There are three classes of anthelmintic available for use:

Discovered in the 1960s, the white drenches were highly effective against adult and immature gastrointestinal worms. Unfortunately, their overuse has led to widespread resistance in multiple species of worms including Ostertagia spp., Cooperia spp., Haemonchus spp. and Trichostrongylus spp. They are generally administered orally and have little to no residual effect, meaning a single treatment will kill the parasites present in the animal at the time of treatment, but will not protect against re-infestations. An example of a white drench registered for use in dairy cattle is fenbendazole (Panacur®, Coopers Animal Health).

Levamisole has been used for the control of gastrointestinal worms in dairy cattle for ~50 years. It is effective against mature worms and larval stages of some species, although ineffective against the arrested stage of Ostergia ostertagii. This limits its sole use in certain regions during at-risk periods.

Resistance is common particularly from Ostertagia spp. but also Trichostrongylus spp. Levamisole is generally available as an oral drench or a pour-on and has minimal residual effect. Pour-on products should be used with caution in hot weather as toxicity can develop due to rapid absorption.

The first macrocyclic lactone, ivermectin, was introduced in the 1980s and it revolutionised the control of veterinary parasites in livestock, horses and pets. They are highly effective against a broad-spectrum of gastrointestinal worms but are also classed as endectocides, meaning they are effective against ectoparasites as well (lice, mites, ticks). However, they are ineffective against flukes (trematodes) or tapeworms (cestodes). Resistance is common in all animals and in dairy cattle include the worm species Cooperia spp., Ostertagia spp., Trichostrongylus spp. and Haemonchus spp.

They can be administered orally, by injection or as a pour-on and have a much longer residual activity than the other classes of anthelmintic, offering a period of protection after a single treatment. Examples of macrocyclic lactones registered for use in dairy cattle include doramectin (Dectomax®, Zoetis), moxidectin (Cydectin®, Virbac) and eprinomectin (Ivomec® Eprinex®, Merial). 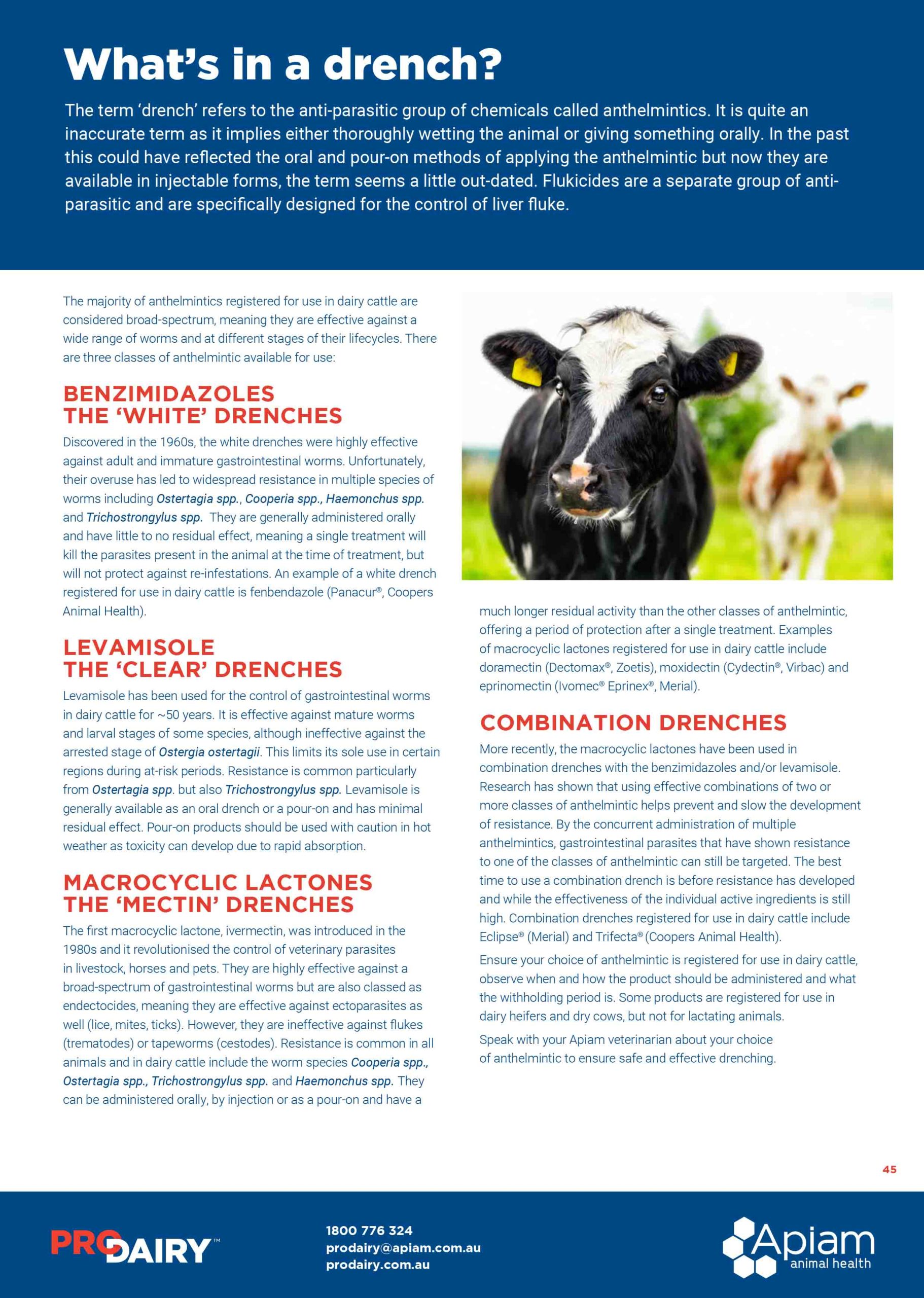 More recently, the macrocyclic lactones have been used in combination drenches with the benzimidazoles and/or levamisole. Research has shown that using effective combinations of two or more classes of anthelmintic helps prevent and slow the development of resistance. By the concurrent administration of multiple anthelmintics, gastrointestinal parasites that have shown resistance to one of the classes of anthelmintic can still be targeted. The best time to use a combination drench is before resistance has developed and while the effectiveness of the individual active ingredients is still high. Combination drenches registered for use in dairy cattle include Eclipse® (Merial) and Trifecta® (Coopers Animal Health).

Speak with your Apiam veterinarian about your choice of anthelmintic to ensure safe and effective drenching.