Are your heifers reaching the correct weight?

THE IMPORTANCE OF GROWING HEIFERS WELL

Your future herd reproductive and lactation performance relies on optimal management of heifers from birth. The typical cost of rearing a heifer until first calving at 24 months of age could exceed $2000 and includes costs such as feed, health and breeding, labour and calf value at birth.

After first calving, heavier heifers are more likely to show a heat prior to mating start date and have better first service conception rates than lighter heifers. They also have fewer calving problems, better transition into the milking herd and improved lactation performance. A 50kg heavier heifer at first calving will produce an extra 1041 litres of milk, 38.5kg butter fat, 42.5kg of protein over the first three lactations. Additionally, heavier heifers at first calving have increased longevity compared to poorly grown heifers, likely due to their improved fertility and fewer health problems.

With more heifers entering the herd, the overall herd age will be younger, allowing for selective culling of older cows. Younger animals tend to be more fertile and have fewer milk quality issues than older cows as they have had less opportunity to develop mammary infections.

WHAT IS THE CORRECT WEIGHT?

Heavier heifers at first mating are more likely to show sexual activity than lighter heifers. Decisions around first mating should be based on body weight, not on age. In seasonal and split calving herds, heifers may be 13-15 months of age at first mating. This means that the youngest animal in the group must be sufficiently grown so there is the best chance for her to get in calf quickly and easily. At first mating, heifers should weigh 60% of their mature body weight and measure 87% of their mature wither height. Commonly smaller heifers are ‘carried over’ to a younger group so they have more time to grow out prior to first mating. This increases the AFC, significantly reducing profitability as the heifer has taken more time and money to rear.

At first calving, heifers should weigh 94% of their mature body weight and measure 95% of mature wither height. For example, if the average mature cow in a herd is 600kg with a wither height of 135cm, a heifer should be calving at 564kg and measure 128cm at the withers.

HOW CAN I HELP MY HEIFERS TO ACHIEVE THIS?

Monitoring growth between weaning and first calving provides an objective assessment of heifer growth. Average daily gain can be monitored so that heifers achieve target weights at the critical times of first mating and calving. Small heifers can be identified early, allowing strategic intervention to reduce the risk of them being carried over to a younger group. Routine animal husbandry procedures (eg. vaccination and drenching) can be carried out during weighing to reduce any additional handling or stress. 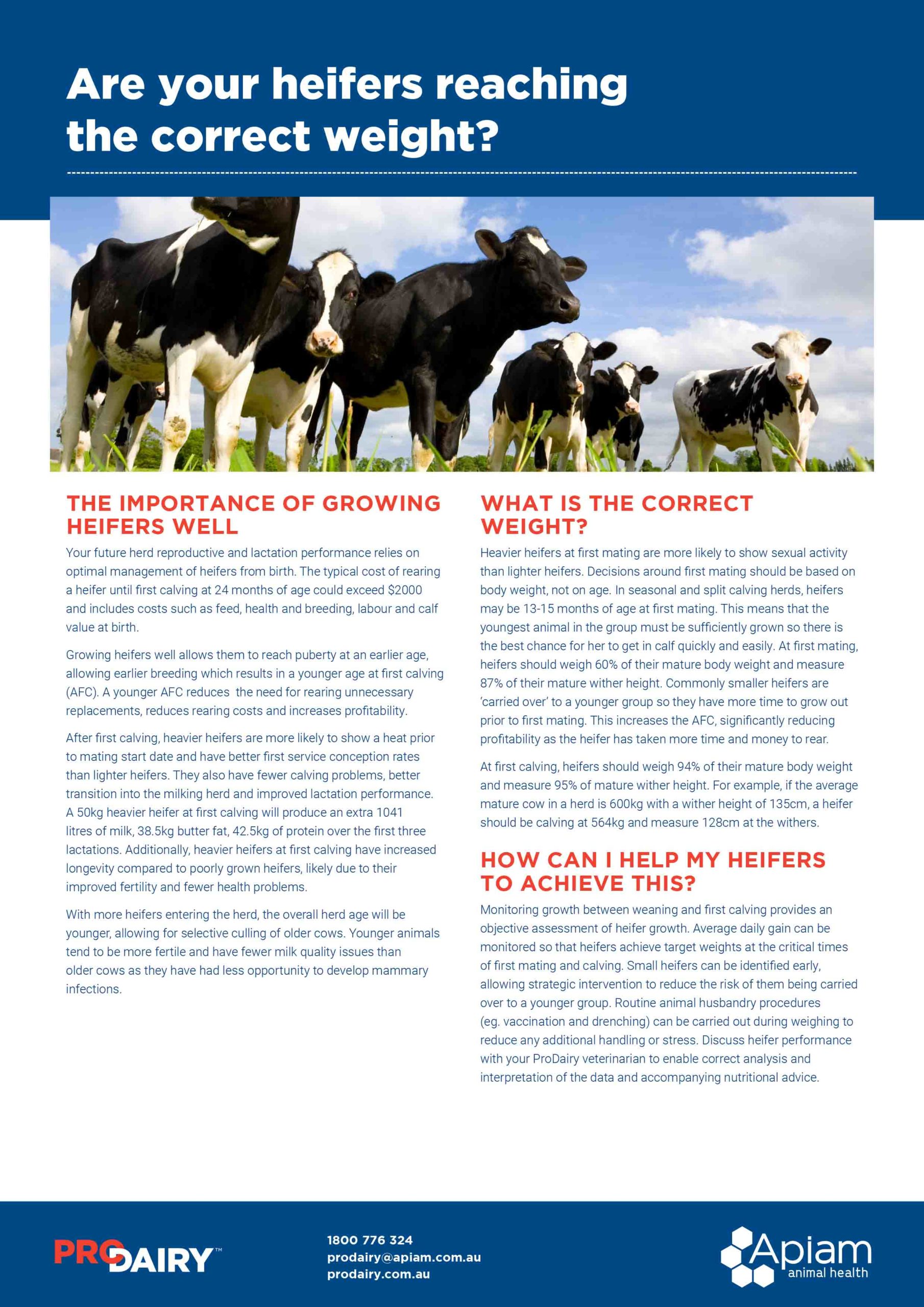 Discuss heifer performance with your ProDairy veterinarian to enable correct analysis
and interpretation of the data and accompanying nutritional advice.