Mastitis is persistent inflammation of the udder tissue caused by infection or physical trauma. The two main aims of treatment during lactation are: 1) Returning the milk to normal with an acceptable somatic cell count (SCC) so that the milk is saleable, and 2) Getting rid of the bacteria. Visibly normal milk with an acceptable cell count is easier than ridding the infection completely. Mild mastitis can often disappear in a few days with no treatment or with massage and hand stripping of the quarter. However the bacteria may still be present. The same scenario can occur after antibiotic treatment. Achieving a visible cure without a complete bacteriological cure may result in a permanently
raised SCC.

The treatment of mastitis frequently involves the administration of antibiotics. An antibiotic may have a systemic effect – by injection into the muscle or under the skin of the animal – or it may be infused into the teat through the teat canal (intramammary). Intramammary antibiotics are generally the first-line treatment for cows with mild uncomplicated mastitis in a single quarter. Systemic antibiotics tend to be used when more than one quarter is affected, when udder changes are marked or when the cow is obviously ill. Combination therapy, with both systemic and intramammary antibiotics, may increase bacteriological cure rates but should only be used based on advice from your veterinarian. All farms should have customised treatment protocols for the treatment of mastitis with antibiotics. This should include details such as when to use intramammary antibiotics, when to use systemic therapy and when to use combined treatment, as well as guidance on when not to treat because the cow is unlikely to respond. Pain-relief drugs ( also called Non-steroidal anti-inflammatory drugs, NSAIDs) help reduce the inflammation and pain associated with mastitis. Research has shown their use is beneficial in the treatment of mastitis by improving cure rates and post-infection somatic cell count.

Apparent “failure” of a treatment occurs for several reasons: Inappropriate choice of antibiotic – the bacteria causing mastitis are not responsive to the chosen treatment. Inappropriate concentration of antibiotic (too low) for an inappropriate period (too short) – most of the bacteria causing mastitis are killed but some remain at the end of treatment.
This causes a relapse of the infection. Re-infection – bacteriological cure has been achieved with treatment but the cow becomes re-infected with either the same or different bacteria. Persistent infection – some bacteria cause irreversible damage to the udder which prevents the antibiotic from penetrating the area of infection with sufficient concentration.

Broad-spectrum antibiotics are effective against a wide variety of bacterial species and are useful where the causative bacterium is unknown. However, for maximum targeted effectiveness and to limit future antibiotic resistance, a narrow-spectrum antibiotic is likely to be more useful, but this requires knowing which species of bacterium is causing the infection. Determining which antibiotics to use for first-line treatment relies on a thorough understanding of the main pathogens on your farm. This is critical to the development of your mastitis treatment protocols. True antibiotic failure is a rare cause of poor response to treatment. 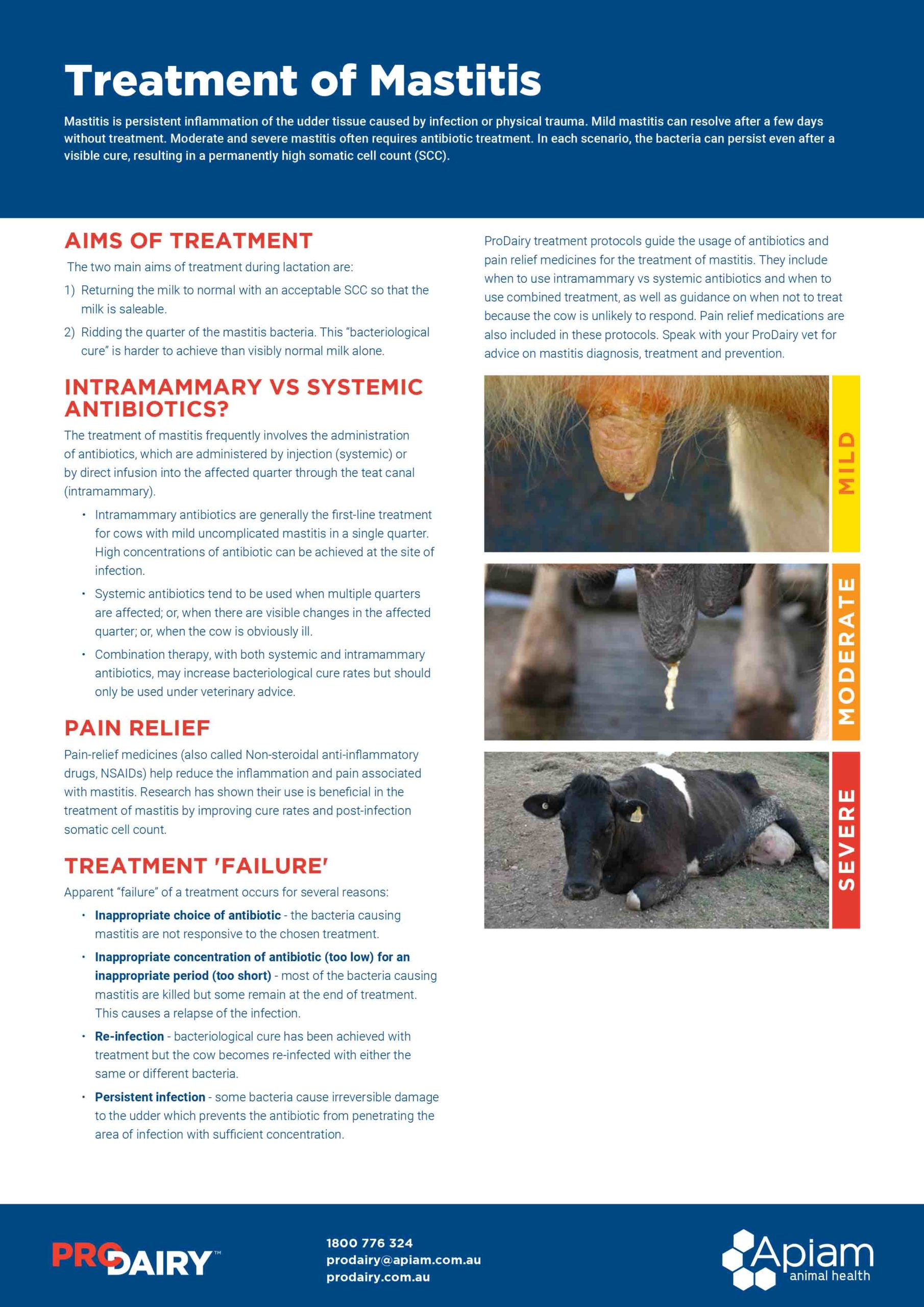 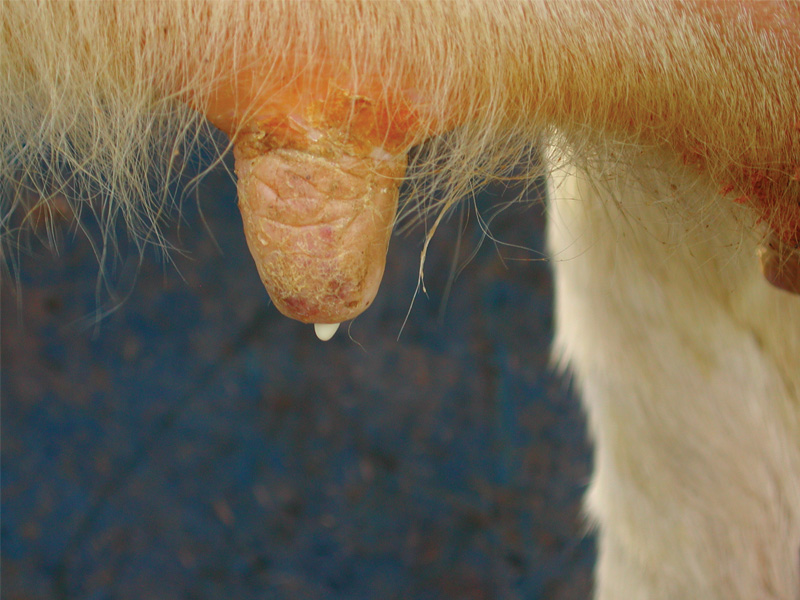 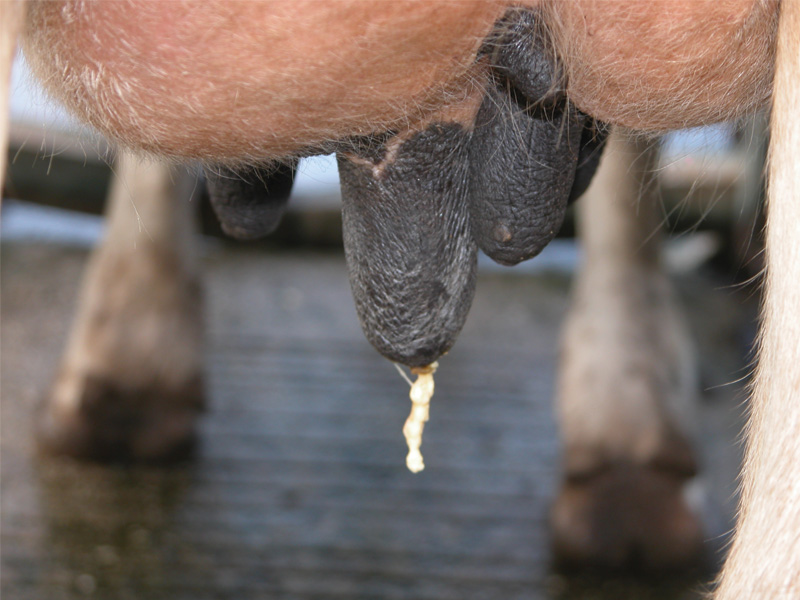 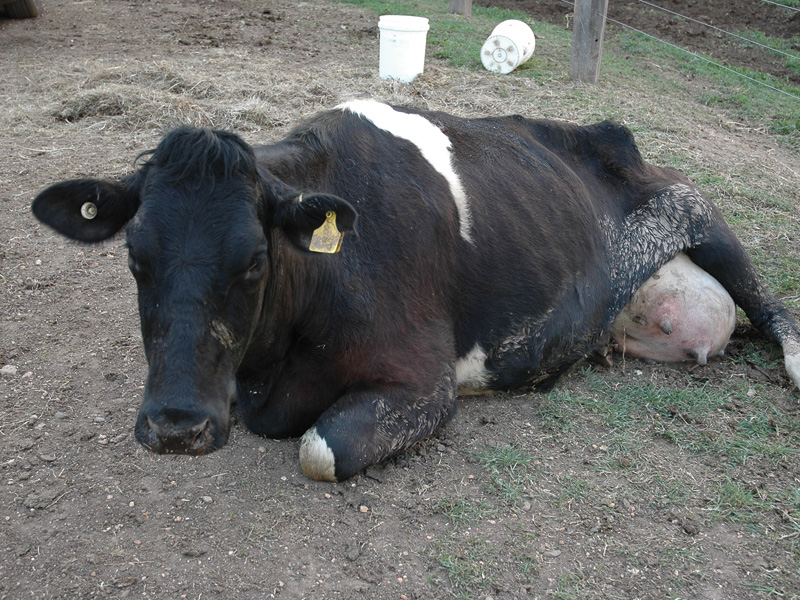 Speak with your Apiam veterinarian to discuss the diagnosis, treatment and prevention of mastitis.