On the look-out for cancer eye

The most common type of tumour or “cancer eye” in cattle is squamous cell carcinoma.

Cattle with non-pigmented eyelids and conjunctiva are at increased risk with Herefords and white-faced Holstein-Friesian cattle being more frequently affected. Cancers usually start on the unpigmented skin but can spread to pigmented areas.

Older cattle are more susceptible with the disease being uncommon in cows under 5 years of age. This is likely related to increased exposure to other risk factors such as sunlight. Viruses have also been implicated but their importance is not fully understood. 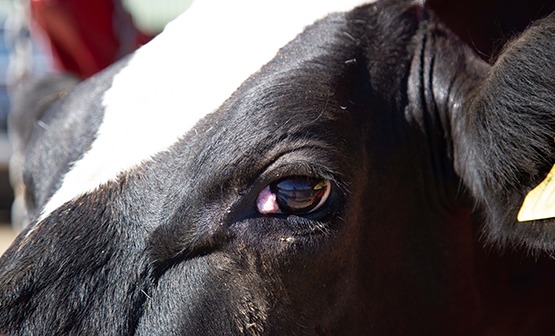 The tumours are found most commonly on the third eyelid, the upper and lower eyelid margin and on the eyeball itself. There are 4 common appearances, three are benign and the fourth is highly malignant, meaning it has the ability to spread to adjacent tissues.

Plaque (benign): small circular, white elevation on the surface of the eyeball.

Keratoma (benign): hard, raised growth on the eyelids, often with discharge and debris.

Carcinoma (malignant): nodular and cauliflower-like. Commonly is bloody, ulcerated and foul smelling. Can initially appear as one of the benign forms or can simply arise without any of the benign stages.

Treatment must be prompt, aggressive and performed by a veterinarian. The success of treatment is highly dependent on the location of the tumour and invasion of surrounding tissues. Tumours can be surgically excised, either in isolation or may involve removal of the entire eyeball. Excision does not guarantee a cure and high recurrence rates (40-50%) can sometimes occur. Your veterinarian will check the lymph nodes of the head and neck prior to any treatment to help give a prognosis. Cryotherapy (freezing the tumour off with a cryogen such as liquid nitrogen) can also be used and works well on small tumours (<2cm diameter) on the eyeball itself. Another therapy involves exposure of the tumour to ionising radiation such as strontium-90.

Routine inspection of all cows (>3 years) allows early detection and treatment of cancer eye. Always check both eyes as ~30% of affected animals will have lesions on both eyes and sometimes multiple lesions on one eye. Identification of plaques, papillomas and keratomas is preferable as these early stages are easier to treat and have a better prognosis. All treated animals should be closely and regularly observed for recurrence. Early culling of affected animals is a viable option due to the risks of recurrence and carcase rejection at slaughter. Severely affected animals should be humanely destroyed immediately to minimise discomfort and suffering. In the long-term, cancer eye can be effectively controlled by selection for pigmented eyelids. Eyelid pigment is present at birth, whilst eyeball pigment usually takes >5 years to fully develop. Both are highly heritable and appear to be genetically related, thus selection for one effectively selects for both. 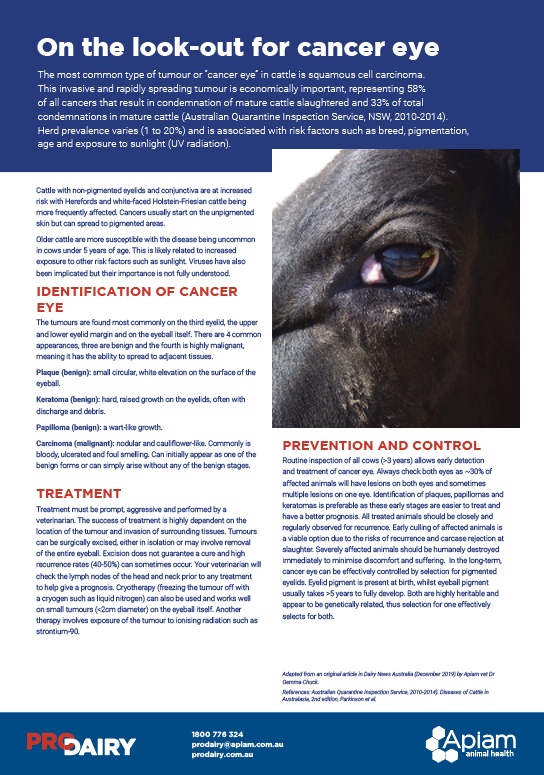 Have any questions? Talk to your dairy vet on how to early identify cancer.