Perennial Rye Grass Staggers (PRGS) is a common condition of cattle, sheep, camelids, and horses in many regions of Australia.

Perennial ryegrass (Lolium perenne) is one of the most commonly sown pasture grasses in Australia. Most established perennial ryegrass plants are infected with a native endophyte fungus known as Neotyphodium lolii, which grows within the leaves, stems and seeds of the plant. This fungus produces toxins which can accumulate in the plant, peaking in summer/autumn. The toxin level can remain high in the pasture for 5-6 months and silage made during this time may retain similar concentrations of toxin for >200 days. In hay the toxins appear to decline significantly over a similar period.
The fungus does not harm the plant and actually has many known benefits including increased resistance to insects and drought. The fungus can only spread to ryegrass plants from infected seeds as it does not produce spores and cannot spread from plant to plant in the paddock. It has a short lifespan (18-24 months) in the seed under normal grain storage conditions.

How are cattle affected?

Cattle grazed on pastures containing N. lolii may exhibit signs of PRGS within 7-14 days of exposure, with younger animals more severely affected. The fungus and toxin occur mainly in the plant very close to the ground thus hard grazing of infected pasture is likely to induce ryegrass staggers.

Mildly affected animals develop tremors which become more severe when they are exposed to physical stress such as mustering and external stimuli such as humans, dogs, vehicles and noise. While PRGS is not in itself fatal, severely affected animals often die of accidental causes such as dehydration, starvation or drowning whilst seeking water in an attempt to cool down. Animals can also be subclinically affected resulting in production losses such as reduced liveweight gains in young stock, lowered fertility and reduced milk yields. Prolonged exposure to toxic pasture can lead to permanent neurological damage.

The typical symptoms of ryegrass staggers in cattle include:

There is no specific therapy for perennial ryegrass staggers. Cattle should be very quietly moved, without a dog, to a safer paddock with a water trough rather than open water to reduce the risk of drowning. Collapsed animals should be moved to sheltered areas and provided with shade, food, water and nursing care.

Severely compromised animals should be humanely destroyed on welfare grounds. Mildly affected animals recover after 2-3 days (sometimes up to 14 days) after they are transferred to ‘safe’ pasture.
The recovery rate will depend on the level of toxin in the ‘safe’ pasture. If other pastures are not available for grazing, feed should be supplemented to reduce pasture intake. Dairy cows that go down in the milking shed should be left alone, as they usually recover and can walk out on their own within an hour or so.

Pasture management is key in preventing perennial rye grass staggers. Since the ryegrass plant and N. lolii have a mutually beneficial relationship, grasses available without the fungus do not thrive as well as those with it. Over-grazing can cause animals to graze the base of the plant, where the toxin accumulates, so care should be taken to keep pastures leafy, if possible. Removal of dead litter and cultivation of clover in the pasture can reduce toxin intake as well, although this is often difficult in dry summers. 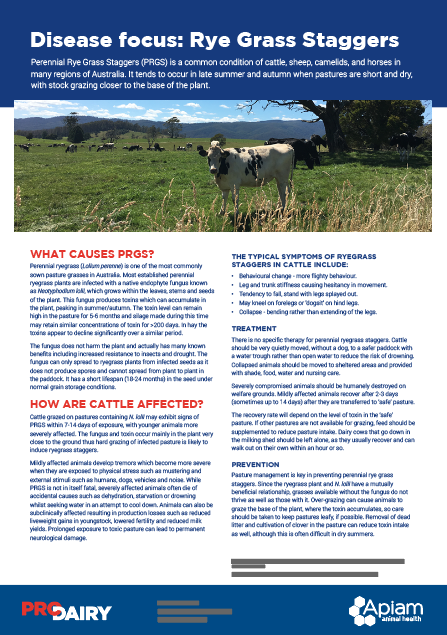